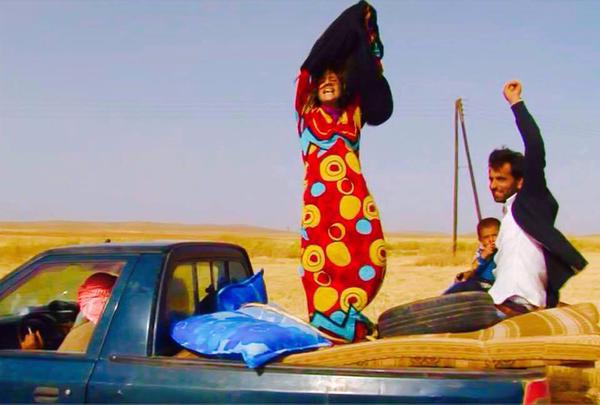 I know, I'm late. But how can photo prizes for 2015 be awarded already during December when the bygone year not even is over? Let alone time to reflect it? Answer: Because the commercial press wants to publish their articles at a – preferably early – point of time when they sell best, in this case therefore around Christmas or the end of the year. Fortunately or sadly (sometimes I'm not so sure about that myself), I have (almost) nothing to sell.

Even after inspection of other awardings, in the end to me the not only most moving, but also most joyful picture of the last year remained the above "Freedom Portrait" from Rojava in Northern Syria. It is part of a short video, captured on the 2nd of June 2015 by the cameraman and spokesman of the multi-ethnic umbrella organization Euphrates Volcano (meanwhile: Syrian Democratic Forces, SDF; founded by the Kurdish People's Defense Units YPG) Shervan Derwish in cooperation with the photographer and free journalist Jack Shahine, of whom I've already published photos several times in this blog.

Women on truck beds of getaway cars who had escaped the sphere of the homicidal caliphate of the IS terrorists (Daesh) laughingly pulled off their (in 'Daeshistan' compulsory mandatory) black burkas and let them fly away in the wind... underneath emerged colourful and garish dresses... what a picture! It stands not only for the unavoidably hidden resistance and the liberation from the depressing oppression in the caliphate, it also stands for undestroyable lust for life, optimistic awakening and the secular revolution in Kurdish-shaped Rojava (Northern Syria), in which the emancipation of the women plays a central role. Therewith it unites a whole range of the most important topics of the year 2015 (like war, terror, oppression and fleeing) with unexpected positive aspects (fleeing, resistance, revolution, emancipation, fashion, and not least: laughter!). [more about that topic soon under the title "When Fashion returned to Rojava".]

Despite the surely not perfect picture quality caused by situation and equipment (we are in one of the most bloody war zones of the world!) my choice appreciates the impressive intensity and allegoric iconography of this picture and I see it also as a thank-you for all the liberations of the year 2015 from the barbaric Daesh jihadists, made possible at endless sacrifice and life-endangering commitment by predominantly Kurdish forces, but in the end coming from all ethnic groups, religions, walks of life and nations. This goes especially also for the many people who – completely forsaken especially by Germany and the EU – have paid the defense of humanity against barbarity with their lives.

In the end, in many respects my List 2015 was made quickly and I have reported about most of it in the blog, too (see links under the 'prize winners').
Selected were only clear 'winners' (among them – non-randomly on the right-hand side of my list – nevertheless also just as much negative prizes), since as you know we have promised yet early in our Manifesto to never want to work again (and yet we do this permanently...).
So no subsequent researches, no comparisons, just to me clear results:


Winners 2015:
YPG & YPJ
In 2015, the Kurdish People's and Women's Defense Units have chased away
the IS jihadists (>Daesh) from large parts of Northern Syria (Rojava)
and sent thousands of them to hell. Thank you! ♥ 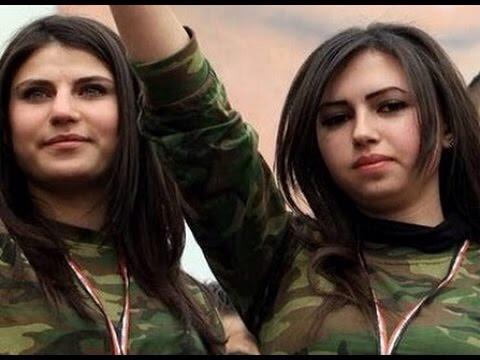 Even though we try to avoid talking about them at all
(same as with German racist movement >Pegida, see further below),
sometimes we need to mention these scumbags in order to fight them:
Pac-Man gegen (against) #daeshbags (Nov 2015)
K(l)eine Lehren aus Paris (Nov 2015)
The Last Massacre of the Jihadists (June 2015)
Je suis Charlie... je suis Ahmed... je suis juif... (Jan 2015)
The Politics Of The Past * (Nov 2014)
* In the latter article, part III of my early series "From H&M to Kobanî",
#daeshbags are introduced along with their German-racist 'mirror movement'
called "Hooligans against Salafists", a predecessor organization of >"Pegida"
who actually were founded protesting against a left-wing solidarity rally for the Kurds in Rojava!

Permanentely responsible for... uhh, that's too much:
...supporting islamistic terrorists like >Daesh,
...attacking, arresting, jailing or shooting
democratic civilians, politicians, mayors, lawyers, critical journalists
& even children on a daily basis!
... war against his own citizens
... military attacks in Northern Iraq and against >YPG&YPJ in Syria

Supported by >EU and especially >Germany (CDU / CSU / SPD government)
as an 'alternative' to >Assad and to stop Syrian Civil War refugees escaping to >Europe!
Partners in crime: the German racist movement >Pegida

War Criminal of the Year:
Bashar Hafez al-Assad
President of Syria since 2000.
Has some points on his side, but throws them in form of
barrel bombs in neighbourhoods and on civilians, children, everybody in his lost country.
Responsible for more war crimes than ANYBODY in this disgusting war.
Mainly supported by far-right wing movements & parties all over the world, by Iran and
by Putin ruled Russia, another dictator I warned you of already at the end of 2013
(in my article about the Russian feminist punk collective Pussy Riot).

Assad admittedly is underrepresented in this blog,
but he has his role in my article about music & refugees:
Pop & Elend (Oct 2015)
("Pop & Misery"; (mainly) in German, but international music)

Hypocrites of the Year:
EU / Germany
Pretending to criticize both, actually supporting both:
>Erdogan directly, >Assad by doing nothing.
Leader of the pack:
(otherwise sometimes not that wrong, see "Truth of the Year")
German chancellor >Angela Merkel.


Truth of the Year:
"Wir schaffen das!" ("We will manage / handle this!")
German Federal Chancellor Angela Merkel about hosting refugees in Germany.

Of course 'we' will/can manage this in one of the richest countries of the world!
Not least thanks to the committed work of thousands of people, too,
who are active in one form or another for and with refugees.
We as STYLE! IT! TAKES! project also want to heartily thank all these
dedicated and helpful people. Keep it up! ♥
Since Angela Merkel unfortunately has forfeit her prize (see the right part of these awards),
our trophy migrates symbolically to all those volunteer helpers
who more than earn it. :-) 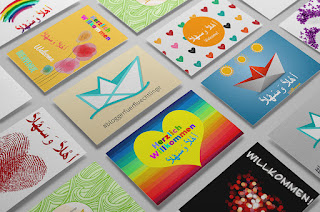 Welcome cards for refugees in Germany #RefugeesWelcome
One out of many little actions by a project we take part in
called #BloggerfürFlüchtlinge (BloggersForRefugees)
www.blogger-fuer-fluechtlinge.de

Stupidity of the Year:
Merkel supports Erdogan
It would have been a nice idea for a revolutionary blog to surprisingly even once grant a credit to conservative Federal Chancellor Angela Merkel (see left). Sadly, she directly forfeit it completely again (not only with us) when amidst the election campaign in Turkey (see the following award for the Kurdish >HDP) she met Turkish state terrorist >Erdogan and – besides scandalously being his election campaign aide – as well even promised to him 3 billions of Euro if he keeps off Syrian Civil War refugees from fleeing to the EU!
Therewith this war criminal now can buy some new tanks
with whom he can let shoot on his own population (see #TurkeysWarOnKurds).
As stupid as can be. A shame. 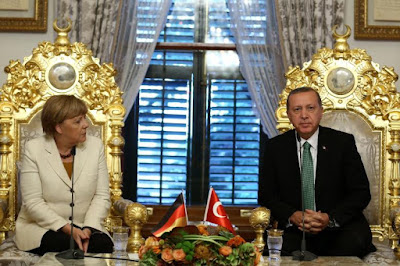 The new 'Kurdish' party stands for democratic, social & ecological change,
minority, women & LGBTQ rights and a new peace process in Turkey.
It was the first time the party took part in elections for the national parliament.


Best political event in Germany:
End of the Nuclear Power Plant Grafenrheinfeld
on 27th of June 2015 in Bavaria.

With this decommissioning – part of Germany's nuclear power phase-out policy –
now 8 nuclear power plants are left running in four federal states of Germany
(in early 2011 it still had been 17 nuclear power plants in Germany!).
Three of them are run by the E.ON company, three by RWE, two by EnBW.
Next reactor to be decommissioned in Germany will be in 2017 Gundremmingen B (Bavaria).
It will take till the end of 2022 to finally end this horrific episode in Germany.
According to a German law, then, the radioactive waste has to be stored safely just
for about 1 Million years. :-p 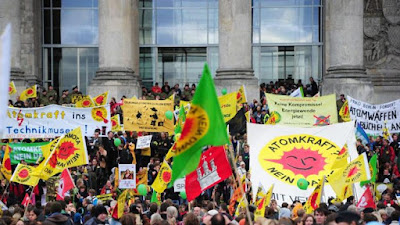 "Nuclear power into the Museum of Technology!" (banner to the left)
Anti-nuclear protest in Berlin, 18th of September 2010
Though it was not allowed, hundreds of protestors gathered
directly in front of the 'Reichstag' (German parliament). I have been there, too. ;-)
I don't use nuclear electricity anymore in my household since about 10 years.
Photo via tagesschau 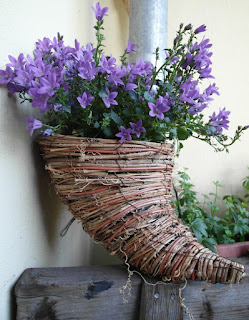 Most unlikeable city of Germany:
Dresden*

* Heartland of the racist >'Pegida' movement
where they hold about weekly racist & nationalist protests
against foreigners and refugees.

Best satire (Germany):
Toyah Diebel
A lovely German radio presenter who made fun out of one of
>Pegida's former female 'leaders':

See my blog post:
Wie Toyah Diebel in 3 Minuten Pegida abschminkte (Febr 2015)*
My post title is a word play with the German word "abschminken":
"How Toyah Diebel unmasked (removed the make-up of) Pegida in 3 minutes"

Some of the actions: 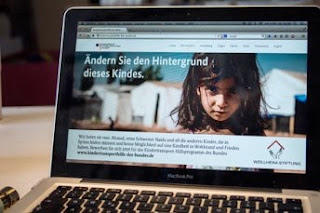 "Change this child's background"
Simulated "Federal Emergency Programme" to increase pressure on
Germany's Minister of Family Affairs, Manuela Schwesig (SPD, Socialdemocrats),
to take in 55.000 Syrian children in Germany (1 out of 100 who would need it). 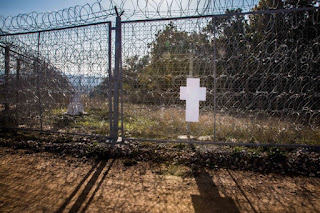 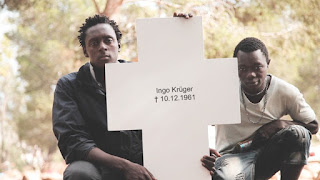 2015, memorial crosses for the victims of the Berlin Wall were 'taken' from the city’s government quarters
to escape the commemoration festivities for the fall of the Berlin wall’s 25th anniversary
to the deadly borders of the European Union.
Here photos taken in Melilla, a Spanish enclave at the north coast of Africa, belonging to the EU.
With this, they protested against the fact, that much more people die there every year
(according to Jean Ziegler about 36.000!) than ever died in the whole 28 years of existence of the
Inner German Border, the Berlin Wall and the Iron Curtain altogether.
More about that action: "First fall of the European Wall" 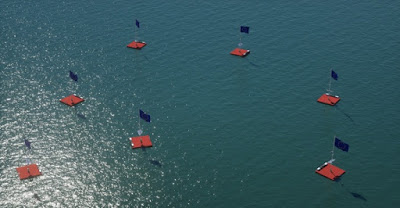 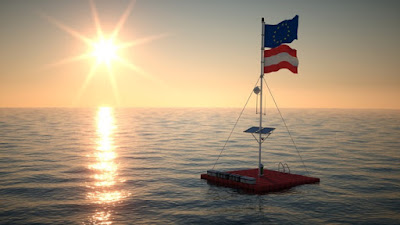 All photos from the official webpage: Center for Political Beauty

Has been so effective in breaking gag orders & news embargoes in countries with
no press freedom like Turkey that in 2015 access had to be blocked several times
by the Turkish AKP / >Erdogan government. It had been of no use. ;-)
Also, Twitter reacts quite quick to complaints about jihadist propaganda accounts (>Daesh)
and deletes them. In 2016, they could be more active to do the same also with other forms
of racist & sexist hate speeches, though. 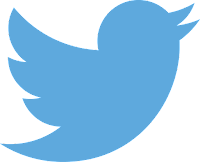 Gets more and more commercial.
Tries to economise fan pages more & more.
Forces even artists to use their real names in their profiles.
Didn't intervene against all the racist shit written in 2015.
Still doesn't allow women to show their own breasts when they wish to do so...

Best band to survive all this:
The Libertines 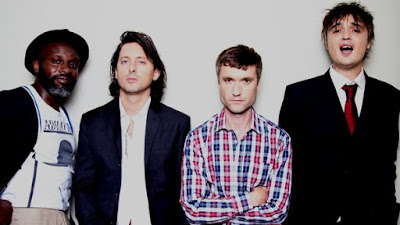 Reunited, aggressive & sensitive and campaigning for refugees.
What do we want more. ♥

is my main wish.
But I have a lot of wishes for all of us.
You can check them here:

P.S.:
Incidentally it is new that there is such a list in this blog at all.
2014 we have awarded two prizes for the first time:

Award for the Most Stylish Molotov Cocktail Toss of the Year
(to Kurdish pop singer Helly Luv from Iraq, quite at the end of the linked article)

Even though the awarded categories will change again and again (*surprise*),
we will probably further expand this new 'tradition' in the future...